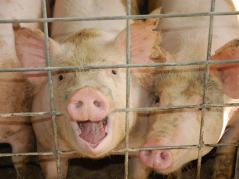 URBANA, Ill. – A new study at the University of Illinois has determined that high-protein canola meal could prove to be a valuable ingredient in swine diets.

“Canola meal is an excellent plant-based source of protein that is often included in swine diets,” said Hans H. Stein, a professor of animal sciences at U of I. “In recent years, canola varieties have been developed which contain greater concentrations of protein than conventional varieties. Our study has provided new information on the nutritional value of high-protein canola meal.”

The paper, "Energy concentration and amino acid digestibility in high-protein canola meal, conventional canola meal, and in soybean meal fed to growing pigs," was co-authored by Yanhong Liu, Neil Jaworski, and Oscar Rojas. It was published in a recent edition of Animal Feed Science and Technology, and the full text can be found online at http://www.animalfeedscience.com/article/S0377-8401(15)30073-0/fulltext.