Tracking the origins of HIV 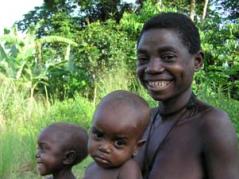 URBANA – Human immunodeficiency virus (HIV) may have affected humans for much longer than is currently believed. Alfred Roca, an assistant professor in the College of Agricultural, Consumer and Environmental Sciences at the University of Illinois, thinks that the genomes of an isolated West African human population provide important clues about how the disease has evolved.

HIV is thought to have originated from chimpanzees in central Africa that were infected with simian immunodeficiency virus (SIV), a retrovirus. “If you look at the diversity present across SIV in chimpanzees, it suggests that they have had it for tens of thousands of years,” Roca said.

HIV-1 Type M, which accounts for 90 percent of human infections, is believed to have crossed the species barrier into human populations between 1884 and 1924. Roca said that it may have crossed much earlier and many times, selecting for genetic resistance in isolated rural populations while remaining undetected.

“Some of the scientific literature suggests that the persistence of HIV in humans required population densities typical of the larger cities that appeared in West Central Africa during the colonial era,” he said.

Perhaps an even more important factor is that, before modern medicine and vaccinations, infectious diseases such as smallpox killed large numbers of people. People with compromised immune systems may have succumbed first, preventing the immunodeficiency virus from spreading.

If HIV crossed the species barrier many times, it is possible that selection favored protective genetic variants in the affected populations. Roca and his co-investigators looked for evidence of this selection in the Biaka genomes.

The Biaka are a human community that inhabits forests in the range of the chimpanzee subspecies believed to be the source of the current HIV pandemic. The researchers compared Biaka genomes with the genomes of four other African populations who live outside the chimpanzee’s range.

Biaka genotypes were available through the Human Genome Diversity Project, which collected biological samples from 52 different population groups across the world. The project genotyped these diverse human communities for single nucleotide polymorphisms (SNPs, pronounced “snips”), or genomic variation, at around 650,000 locations across the genome.

Previous research that used cell lines made in the 1980s from individuals who had AIDS or were believed to be at risk for it had identified 26 genomic locations as being involved in resistance to HIV. Kai Zhao, a graduate student working in Roca’s laboratory, examined these locations.

Zhao ran all 10 possible pairwise comparisons for the five human populations and looked for selection signatures. Specifically, selection for a genetic trait tends to reduce diversity in the surrounding genomic region within the affected population, increasing the differences between populations.

The researchers looked at the genomic regions that contain genes known to have a protective effect against HIV to see if there was any overlap with the selection signatures. Eight of the comparisons found overlap. Seven involved the Biaka.

They identified four genes in these overlaps that code for proteins affecting either the ability of HIV to infect the host cell or the disease progression. The researchers also found that for several genes, SNPs associated with protection against HIV-1 were common among the Biaka.

Roca cautions that these results should not be considered definitive. It is not possible to rule out false positives.

However, he said that the results are intriguing and indicate that this line of research is worth pursuing.

“If additional studies confirm that these genes have undergone selection and that human populations in the region have some genetic resistance to HIV-1, one could try to find additional genes in the population that may also be protective against HIV but have not yet been identified,” he said.

“The mechanism by which these genes work could be determined,” he continued. “It could open up a new line of research for fighting retroviruses.”

“Evidence for selection at HIV host susceptibility genes in a West Central African human populations” by Kai Zhao, Yasuko Ishida, Taras K. Oleksyk, and Alfred A. Roca has been recently published in BMC Evolutionary Biology. It is available online at http://www.biomedcentral.com/1471-2148/12/237/abstract.

This research was supported by the Bill and Melinda Gates Foundation Grand Challenges Exploration Initiative.