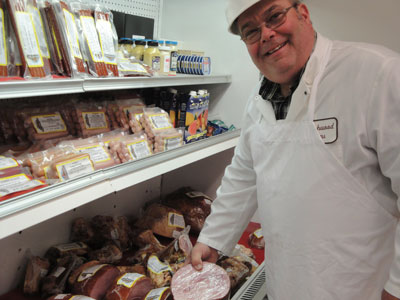 We have a competitive advantage with the education and skills we received from the University of Illinois.

Jim Hankes was ahead of his time. He founded Thrushwood Farms Quality Meats, a specialty meat shop, that brought pork from the family farm to families’ dinner tables long before today’s “eat local” initiatives.

Today, Thrushwood farms is run by Jim Hankes, his wife Kae, and their two sons, Doug and Jeff – all of whom graduated from the University of Illinois.

“My family attended the U of I because of its reputation. People respect a U of I degree – it is as simple as that,” he said. “I wouldn’t give away my experiences at the U of I for anything.”

With sales doubling over the past four years, Thrushwood Farms is more successful than ever.

“We have a competitive advantage with the education and skills we received from the University of Illinois,” he said.

Hankes believes that without the foresight and advice of the faculty at U of I his business would not be the success it is today.

“My advisor recognized my interests. He encouraged me to pursue my master’s degree in meat science and offered me a position in the Department of Animal Sciences,” he said. “It was a great opportunity that led to the founding of Thrushwood Farms.”

Hankes said it was his solid educational foundation that helped him develop an award-winning meat-processing facility.

“I had production knowledge from being raised on a family farm as well as processing and harvesting knowledge from the U of I Department of Animal Sciences,” he said. “I developed the complete background in science, technical knowledge and interpersonal communication skills I needed to succeed in the business world.”