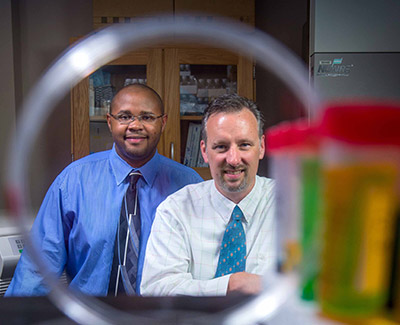 I am not afraid to get out of my comfort zone, try something different, take a different approach, perhaps fail miserably, and move on.

Developing new sources of animal stem cells creates new opportunities in agriculture, both for developed and underdeveloped countries, for medicine and for the preservation of endangered species, said Steve Stice.

Steve is a professor and the director of the Regenerative Bioscience Center at the University of Georgia. His lab is working to create other solutions through bioscience, including developing new compounds to treat Alzheimer’s disease and biosensors for environmental toxins.

“I see ways in which people and projects can work together to make something better,” he said. “I am not afraid to get out of my comfort zone, try something different, take a different approach, perhaps fail miserably, and move on.”

Steve said his University of Illinois animal reproduction class introduced him to research through a class project where he tried, and failed, to produce a sheep–goat hybrid.

“That was the first time I was exposed to research where I had no idea of the answers to the questions I was asking,” he said. “I never really turned back, and I am still curious and asking questions. No more sheep–goat hybrids, though—I’ve moved on to stranger topics.”

Steve said he could not imagine earning a degree online and missing out on his academic and social experiences at the U of I, which included being a member of the livestock judging team, Orange Crush, and Alpha Gamma Rho social fraternity.

“I am currently collaborating with several professors at the U of I on a National Science Foundation project that brings together the best in biological science and engineering,” he said. “I can confidently say Illinois has some of the best faculty, and they are making great progress in important research areas and teaching.”