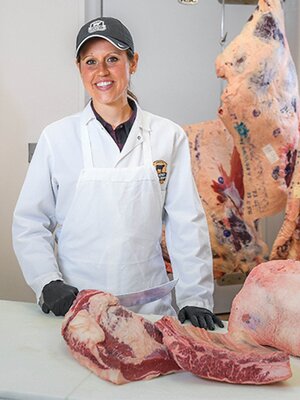 Diana Clark grew up in Chicago’s suburbs and decided to go to the University of Illinois because of the animal sciences program’s prestige and the connection to the vet school. She chose to be pre-vet throughout college but started working in the meat lab and fell in love with meat science. Diana was on the 2009 meat judging team. She was also on the livestock judging team and the meat animal evaluation team. She received her master’s in animal science from the University of Illinois, researching sow PRRS (porcine respiratory and reproductive virus) inoculation and the impacts of muscle growth in offspring.

During her masters, she also coached meat judging. Diana started working at Certified Angus Beef in 2015. She credits networking through the University of Illinois and the Reciprocal Meat Conference to getting her job at Certified Angus Beef. Her favorite part of her job is the education aspect. She teaches groups of adults that want to learn more about the beef industry to better themselves. Her focus is on the beef cuts, where she breaks down a carcass and discusses muscle locations, tenderness, and marbling with the public. Her favorite cut of meat is the Merlot steak from the heel of a round of beef.